Hobbies include collecting stamps, building spacecraft models, and collecting old radio shows, including Suspense, The Shadow, The Green Hornet, etc. (His favorite being the “War of the Worlds” 1938 Orson Wells program.) With a touch towards the “old school,” Michael regularly uses his dial telephone, tube radio, old typewriter and record player which of course still operate just fine. (He does however have a cell phone!)

He has also developed his own space history library over many years which include newspaper articles, slides, video and digital tapes, magazines, photographs on every American manned flight as well as on unmanned missions to the Moon and the planets, and of course several dozen books on astronomy and the history of space flight. He was an original member of the Planetary Society.

For the future, Michael holds a 1969 bottle of wine from the year mankind first walked on the Moon. He intends to use this wine to toast the first time humans set foot on Mars. 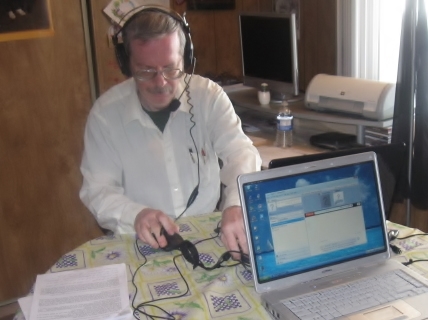 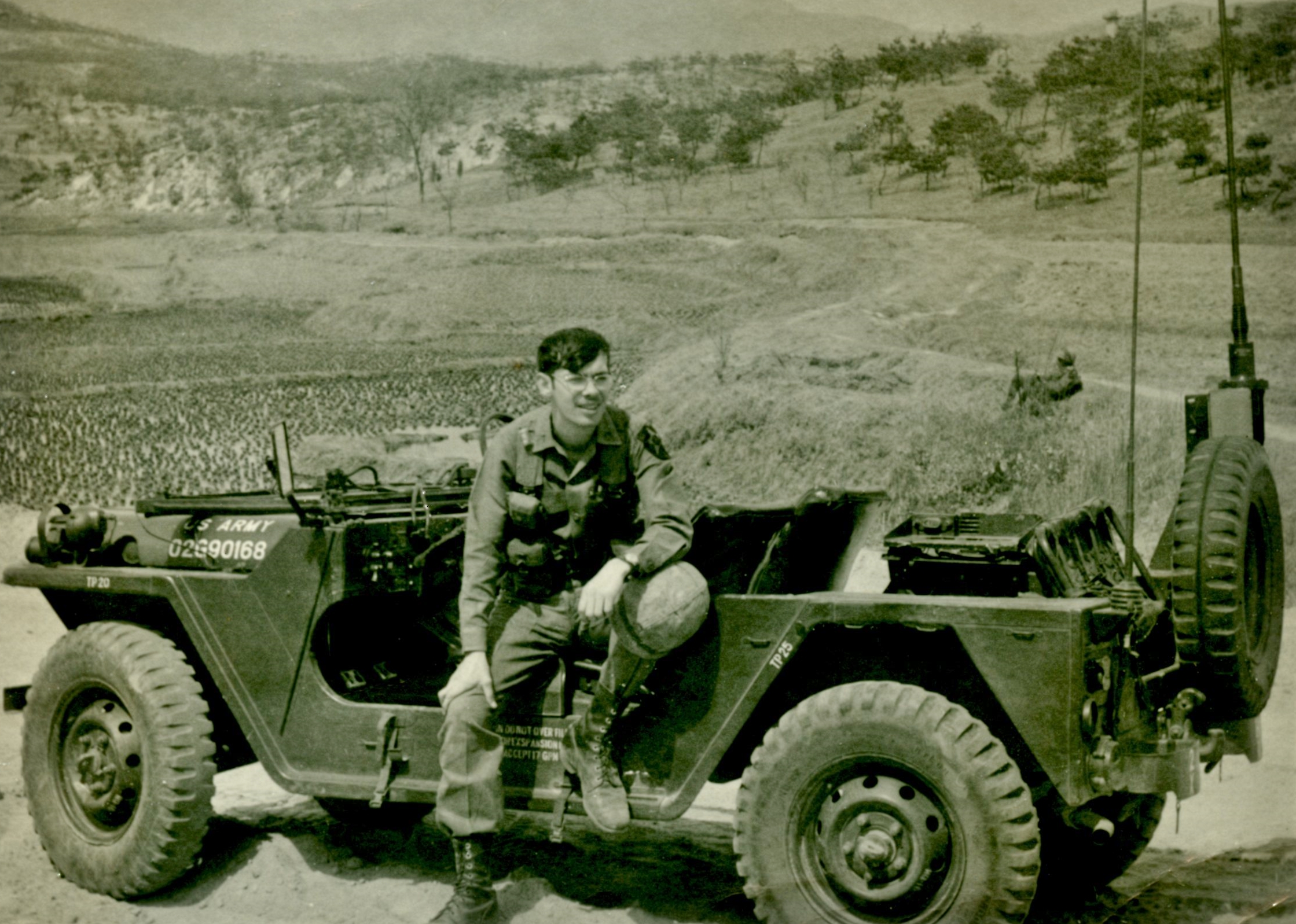 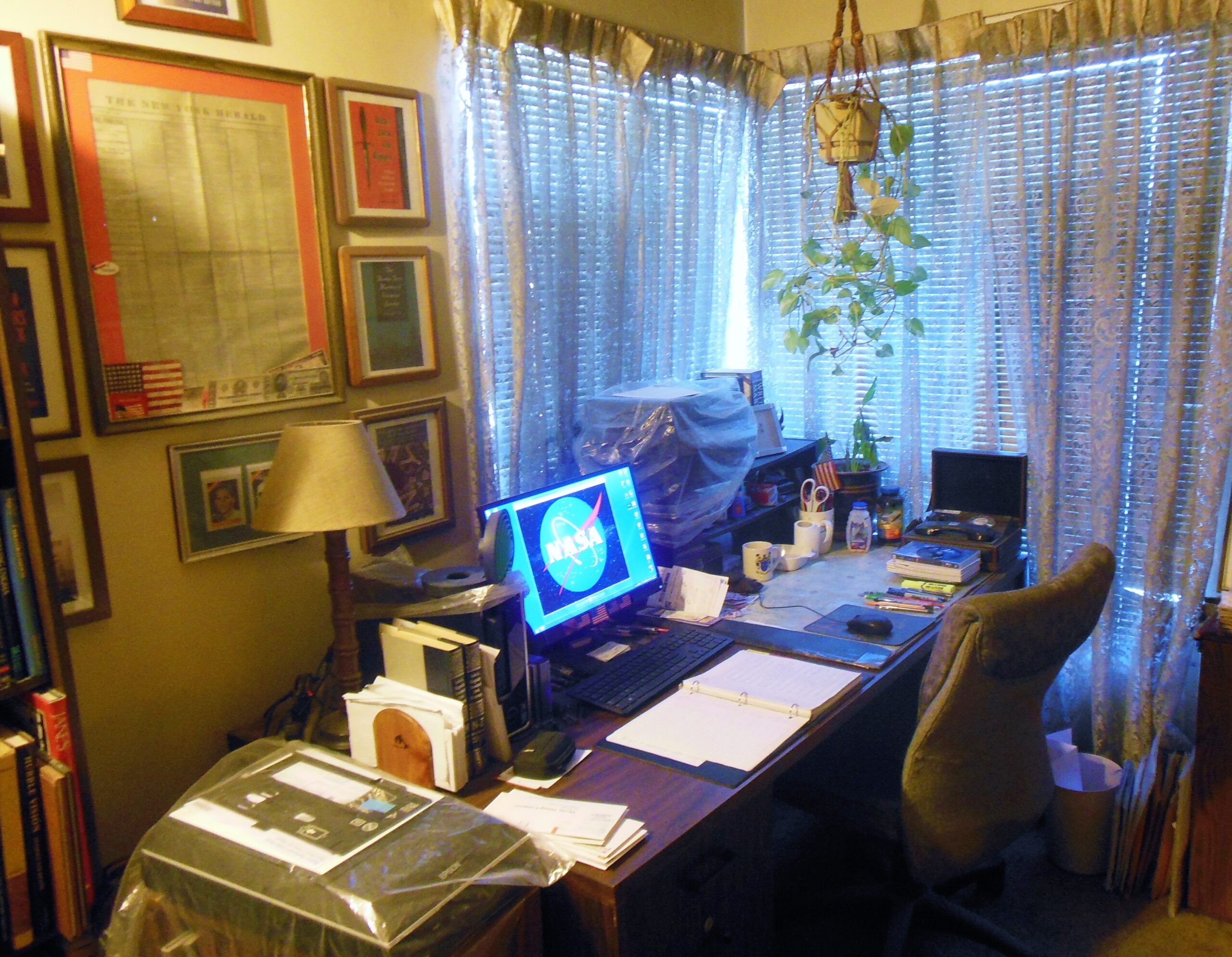 The Korean Demilitarized Zone (한반도 비무장 지대 / 韓半島非武裝地帶; Hanbando Bimujang Jidae) is a strip of land running across the Korean Peninsula near the 38th parallel north. The demilitarized zone (DMZ) is a border barrier that divides the Korean Peninsula roughly in half. It was established to serve as a buffer zone between the countries of North Korea and South Korea under the provisions of the Korean Armistice Agreement in 1953, an agreement between North Korea, China, and the United Nations Command. The DMZ is 250 kilometers (160 mi) long and about 4 kilometers (2.5 mi) wide. There have been various incidents in and around the DMZ, with military and civilian casualties on both sides. Within the DMZ is a meeting point between the two nations, where negotiations take place: the small Joint Security Area (JSA) near the western end of the zone.

The Ronald Reagan Presidential Library is the repository of presidential records from the administration of Ronald Reagan, the 40th president of the United States, and the burial place of the president and first lady, Nancy Reagan. It is the largest of the 13 federally operated presidential libraries, containing millions of documents, photographs, films and tapes. There is a permanent exhibit covering Ronald Reagan’s life, as well as memorabilia such as Air Force One, the aircraft personally used by the president, and a section of masonry from the Berlin Wall. The library is located in Simi Valley, in Southern California, and was designed by Hugh Stubbins and Associates. It is administered by the National Archives and Records Administration (NARA). https://www.reaganfoundation.org/

The Richard Nixon Presidential Library and Museum is the presidential library and burial site of Richard Milhous Nixon, the 37th president of the United States (1969–1974), and his wife Pat Nixon.

Located in Yorba Linda, California, on land that President Nixon’s family once owned, the library is one of 13 administered by the National Archives and Records Administration (NARA). The 9-acre (3.6 ha) campus is located at 18001 Yorba Linda Boulevard in Yorba Linda and incorporates the Richard Nixon Birthplace, a National Historic Landmark where Nixon was born in 1913 and spent his childhood.

Images of documents related to Jack the Ripper, based on research by R. Michael Gordon into the life and murders of serial killer Severino Antoniovich Klosowski as well as testimony given during the 1903 murder trial of Klosowski, alias George Chapman, supplemented by testimony given at the Police Court hearings and Coroner’s Inquest, as well as newspaper interviews with police officials, primary witnesses, private diaries and interviews with Klosowski. Additional statements have been added to this presentation in order to clarify historical events for the reader. This was the only trial ever held which brought to light evidence related to the 1888 through 1891 Ripper murders in the East End of Victorian London. This is the first time in nearly 120 years that these trial events have been presented to the general public. This is the “Trial of Jack the Ripper”.  Severino Antoniovich Klosowski alias “George Chapman”

The Jet Propulsion Laboratory (JPL) is a federally funded research and development center and NASA field center in the city of La Cañada Flintridge (with a Pasadena mailing address) in California, United States. Founded in the 1930s, JPL is owned by NASA and managed by the nearby California Institute of Technology (Caltech).[2] The laboratory’s primary function is the construction and operation of planetary robotic spacecraft, though it also conducts Earth-orbit and astronomy missions. It is also responsible for operating the NASA Deep Space Network. Among the laboratory’s major active projects are the Mars 2020 mission, which includes the Perseverance rover and the Ingenuity Mars helicopter; the Mars Science Laboratory mission, including the Curiosity rover; the InSight lander (Interior Exploration using Seismic Investigations, Geodesy and Heat Transport); the Mars Reconnaissance Orbiter; the Juno spacecraft orbiting Jupiter; the SMAP satellite for earth surface soil moisture monitoring; the NuSTAR X-ray telescope; and the forthcoming Psyche comet orbiter. It is also responsible for managing the JPL Small-Body Database, and provides physical data and lists of publications for all known small Solar System bodies. More info: https://www.jpl.nasa.gov/  ​

Meteor Crater is a meteorite impact crater approximately 37 miles (60 km) east of Flagstaff and 18 miles (29 km) west of Winslow in the northern Arizona desert of the United States. Meteor Crater lies at an elevation of 5,640 ft (1,719 m) above sea level. It is about 3,900 ft (1,200 m) in diameter, some 560 ft (170 m) deep, and is surrounded by a rim that rises 148 ft (45 m) above the surrounding plains. The center of the crater is filled with 690–790 ft (210–240 m) of rubble lying above crater bedrock. One of the interesting features of the crater is its squared-off outline, believed to be caused by existing regional jointing (cracks) in the strata at the impact site. Despite historic attempts to make the crater a public landmark, the crater remains privately owned by the Barringer family to the present day. The crater is privately owned by the Barringer family through their Barringer Crater Company, which proclaims it to be the “best preserved meteorite crater on Earth”. Since the crater is privately owned, it is not protected as a national monument, a status that would require federal ownership. It was designated a National Natural Landmark in November 1967. More info can be found: https://www.barringercrater.com/

The United States Congress approved the construction of Endeavour in 1987 to replace the Space Shuttle Challenger, which was destroyed in 1986.

NASA chose, on cost grounds, to build much of Endeavour from spare parts rather than refitting the Space Shuttle Enterprise, and used structural spares built during the construction of Discovery and Atlantis in its assembly.

Battleship USS Iowa served our country proudly in WWII, Korea, and the Cold War.  Today, the historic U.S. Navy ship is an iconic Los Angeles landmark and considered one of the region’s best outdoor museums for families and visitors of all ages.  Follow in the footsteps of sailors and our mischievous mascot Vicky the Dog and experience first hand why she is known as the “Battleship of Presidents”, “The Grey Ghost”, and “The Big Stick”.  Add-on a behind-the-scenes guided tour to explore areas off-limits to the public and hear first hand accounts of service, commitment, and bravery.  You and your family will make lasting memories during your visit to the Battleship USS Iowa.  https://www.pacificbattleship.com/museum_visit/

John Fitzgerald Kennedy, the 35th president of the United States, is assassinated while traveling through Dallas, Texas, in an open-top convertible. The official Warren Commission report of 1964 concluded that neither Oswald nor Ruby were part of a larger conspiracy, either domestic or international, to assassinate President Kennedy. Despite its firm conclusions, the report failed to silence conspiracy theories surrounding the event, and in 1978 the House Select Committee on Assassinations concluded in a preliminary report that Kennedy was “probably assassinated as a result of a conspiracy” that may have involved multiple shooters and organized crime. The committee’s findings, as with those of the Warren Commission, continue to be disputed. https://www.history.com/this-day-in-h...

The Queen Mary. On May 27, 1936, the Queen Mary departed from Southampton, England embarking on her maiden voyage. She boasted five dining areas and lounges, two cocktail bars and swimming pools, a grand ballroom, a squash court and even a small hospital. The Queen Mary had set a new benchmark in transatlantic travel, which the rich and famous considered as the only civilized way to travel. She quickly seized the hearts and imaginations of the public on both sides of the Atlantic, representing the spirit of an era known for its elegance, class and style. Since her retirement from the sea as an active liner in 1967, the Queen Mary has never been more popular as an iconic Southern California attraction, hotel, and venue for special events. The ship carried some 2.2 million passengers in peacetime and 810,000 military personnel in the Second World War, but here in Long Beach, an estimated 50 million people have visited. https://www.queenmary.com/history/ 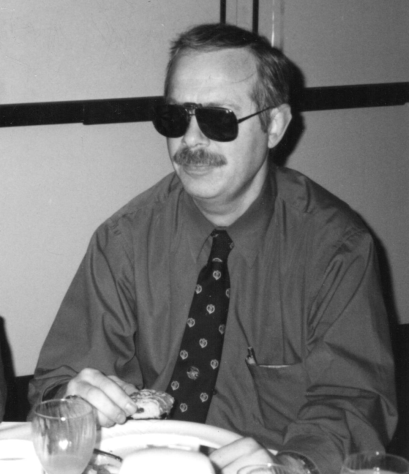 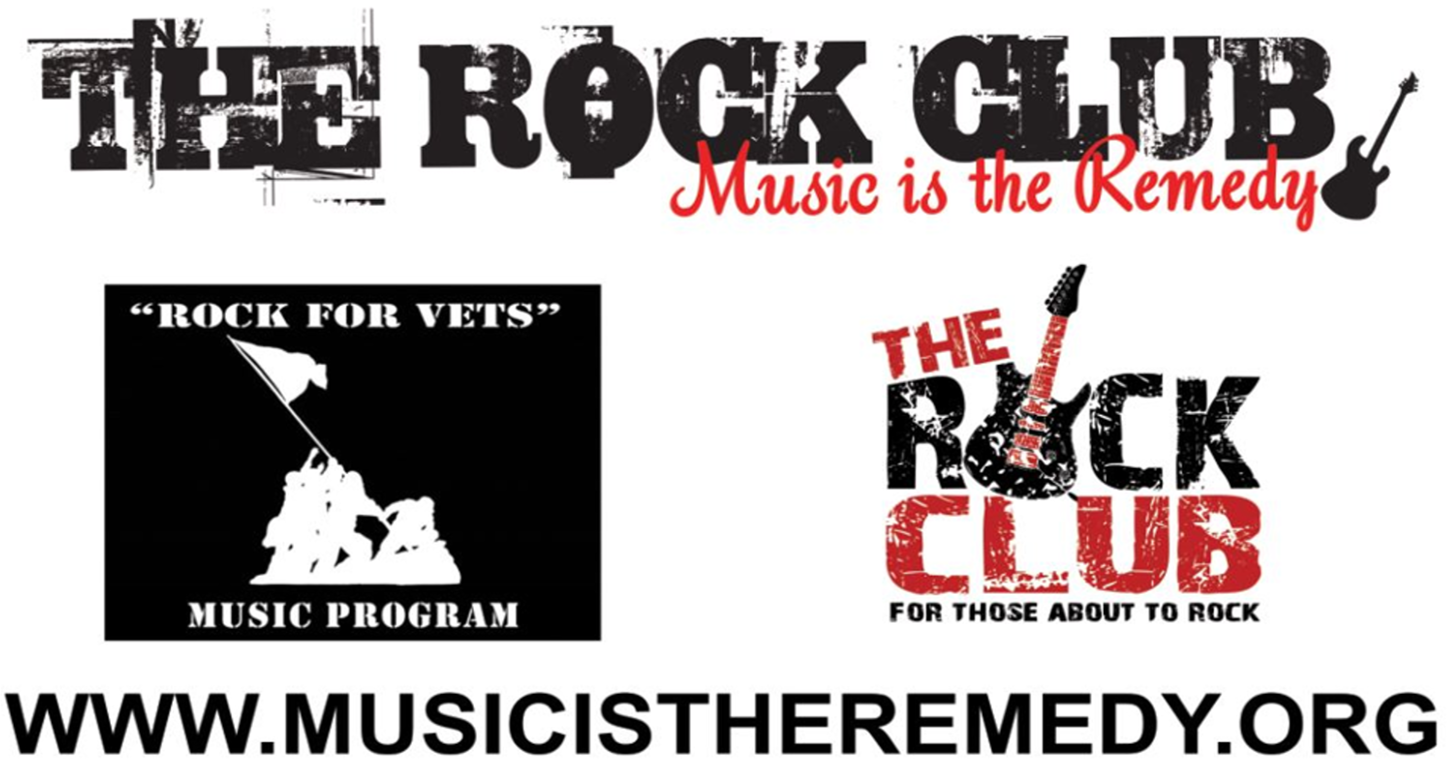 As a Veteran of the US Army, I am pleased to support Rock For Vets, a Long Beach based non for profit, helping Veterans through music.  Check them out.

Warning: this website contains occasionally strong images, which may be unsuitable for all ages.  The website content may be disturbing and disruptive and make you change your mind. Reader/viewer discretion is advised.  What you are about to see you might not like and therefore advised to stop looking at it before things get unpleasant; for you or others.  Some of the content on this website your about to hear/see/read is graphic.